Little Owl is my new painting of a small owl sitting on a branch in a forest just prior to dusk.  In late May, my good friend was in town for a visit and to see my art show.  After dinner we took a walk through the neighborhood as the sun was setting.  I happened to glance over at a dogwood tree in a wooded front yard where I noticed a large barn owl only about eight feet from us on a low branch. We stopped to watch him as he stared at us silently with his large eyes never moving. He was striking and must have been waiting for darkness to set in before hunting.

In recent years, owls have been a big decor item and I had been resisting painting them. Since seeing this owl and also recently hearing an owl’s hoot in the late night I decided it was time to paint one.   I looked up what it could mean when you see an owl and read that there could be a mystery afoot or some kind of transition coming up.  Owls also represent wisdom and intelligence.

My daughter leaves to study in Prague for the semester in just two weeks.  She’ll be taking a photography class along with a couple of language and core classes.  Her passport and visa finally came in the mail today,  her new film camera for the class arrived yesterday so she is just about ready.  Her twentieth  birthday is a few days before she leaves.  She’s got a lot to look forward to, we’re excited for her upcoming adventure.  I plan to paint all weekend, don’t have a subject picked out yet.  Enjoy your weekend!

The Lion’s Gate is my third try at painting a Lion.  This Egyptian Lion is standing below the Sirius star. The ancient Egyptians viewed Sirius as the bringer of new life because Sirius was newly visible in the sky at the time of the yearly flooding of the Nile River.  They depended on the flooding to fertilize their lands.  In August, Sirius lines up directly with the pyramids in Giza.

I wanted to paint a regal lion, as if he were a king.   I placed him on a large monolithic structure looking out upon his kingdom.  As I continued, it became a night scene, which was fun to do.  I like the way he turned out, I feel it’s getting easier for me to paint lions.

The summer season is moving along, my daughter has a month left before she returns to school.  We’ll be visiting my twin sister in a few days, hanging out by their pool, which I’m looking forward to.  Hope all are enjoying these hot summer days!

Years ago I painted the interior one of my large papier mache bowls with a scene of a woman pouring water out of her vessel, the water turned into waves that curve around the  the bowl. I loved the way the image worked so well with the bowl shape.   I still have the bowl which sits in our living room.   I felt like trying to do a painting with a similar idea.  The Star is the result.

A young woman is pouring water into a pond in the evening with the stars shining above. To me the painting symbolizes that each human being is unique like stars in the sky and that through our own uniqueness that we pour out into the world we help to create a better world. It’s good to see people coming together and focusing on how they can contribute in their own way during this turbulent time period.

After my last two paintings which were somewhat dark, I felt like choosing a more lighthearted and whimsical subject.  With the festive holiday season in full swing I decided to paint the mythical sea goat constellation Capricornus.

On the Winter solstice which marks the shortest day of the year in the northern hemisphere, the sun moves into the astrological sign of Capricorn.   It’s symbol is the sea goat.  The goat is sure-footed and steady as it slowly climbs up the mountain while the fish tail represents the depths of the sea.  Taken together it represents a mature individual who uses both their reasoning and intuition.

In this painting, the sea goat is floating in the sky over the mountain tops enjoying the festive winter night.  It’s gotten very cold here, feels like winter.  Our daughter gets home for her winter break in a few days and we’re so looking forward to seeing her and spending time with friends and family.  Hope everyone is enjoying this magical season.

The Girl and the Wolf is my most recent painting for my Heni’s Happy Paintings Etsy Shop.  After finishing my light dove painting I felt like creating a more solid painting.   During my adolescent years in my journals I would often draw a lone wolf sitting atop a mountain. Around that time some challenging events happened within my family which frightened me and I handled those fears by turning inward and becoming a bit of a loner.  In some ways that helped me to be independent, which is why it was easy for me to leave home and travel and live in many places.  Over time I’ve learned to face and integrate those fears.  In this painting the girl has made friends with the wolf. They are not alone, they are in a rich forest and the sun will rise as it always does.

Purchase print here:  The Girl and the Wolf 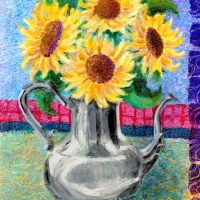 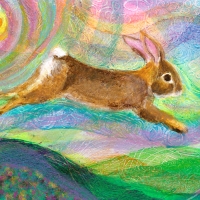 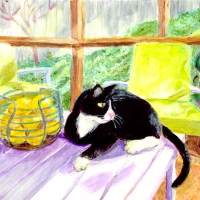 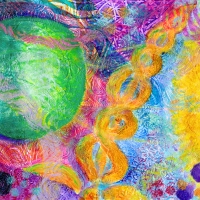